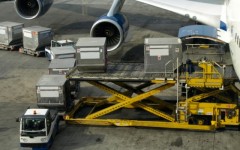 How much is the air freight market worth ?

Is the air freight market getting bigger ?

The annual rate of growth of the air freight industry is over 8% and the expected value in 2030 in over 165 billion .

Who are the biggest players in the air freight industry ?

Describe air freight/ What is air freight? Air freight or Air cargo can be described as cargo transported by air (excluding passenger baggage and mail). The two main options to move air freight is in the belly holds of passenger aircraft or inside a freighter service.

Did you know air cargo accounts for less than one percent of total freight services by weight worldwide, at the same time air freight accounts for over 35 percent of freight by actual value of goods. The statistic suggests that only high value cargo travels by air and that lower value commodities are more likely to be transported by road, rail or sea.  Various academic papers published since the early 1980s have identified and analysed other factors to consider that have an equal, if not bigger , influence over whether a particular commodity is moved by air or by a cheaper , slower and often less reliable surface mode of transportation. Most industry professionals and members of the academic community agree upon a number of factors that are believed to have the broadest and most significant influence on the air- eligibility of specific commodities. The historical relationship between a value per pound and air penetration rates, the percentage of total weight moving by air, is an important factor. However, the relationship is changing, and may break down, as non-value factors become more significant determinants of modal choice. The changing relationship is important because it affects everything from macro-level air cargo demand forecasts to the micro-level design and pricing of specific freight transportation products. Every transport mode offers varying costs and advantages and benefits. To establish the proper context for this chapter, an examination of how and why shippers chose modes of transportation before assessing the most important non-value factors governing air-eligibility must be undertaken. However, first a little history.

1.2 Air cargo has a history before the introduction of aircraft, mail was transported by balloons, dirigibles and carrier pigeons. The first cargo uplifted by aircraft happened on 7 November 1910 when a few bolts of silk were transported by air from Dayton to Columbus, Ohio. The following year in 1911 experimentation with the movement of post was started, and by 1914 regular air service began in the United States. In Germany, the first official air mail flight occurred in 1912. However, it was not until 1925 before a comprehensive airmail service was available in the U.S. On October 7, 1925 the first five Contract Airmail (CAM) routes were issued by the U.S. Postal service to fly airmail between designated points. For example, CAM 1 flew the New York to Boston route and was managed by Juan Trippe, who would later start Pan American Airways. By 1931 85% of airline revenue was from domestic airmail contracts, with 14.8% from passenger service and only 0.2% from freight. If it had not been for the postal service CAM routes, the development of the U.S. commercial aviation section would have been hampered. World War II caused a rapid expansion of the aviation industry and for the first time, large scale movements of freight were carried out to support the war effort. For example, in support of the Nationalist Chinese over 650,000 tons of cargo was transported over The Hump between India and southern China between 1942 and 1945. Later, between 1948 and 1949, the largest airlift in history occurred to support the blockaded city of Berlin, Germany. 9 In the early 1970’s door-to-door express package services came into being. Dalsey, Hillblom and Lynn started DHL in 1969, and Fred Smith started Federal Express in 1971. The leadership role of Fred Smith in building FedEx is a classic study of entrepreneurship. The era of the wide-bodied jets started in 1970 when the first Boeing 747 entered service. This was the first time in history that the aviation industry chose size over speed to increase performance. Soon afterwards, Douglas and Lockheed started production of three engine wide-bodied aircraft, the Douglas DC-10 and Lockheed 1011. In the beginning, only the passenger market was serviced by these new wide-bodied aircraft until the first Boeing 747 freighter was flown between Frankfurt and New York in April 1972 by Lufthansa. The much larger wide-body aircraft represented an increase the volumes carried by narrow body aircraft by a factor of almost 3. In 2018, there were 1870 freighters in operation worldwide. Thirty- percent of these were large wide body (>80 tons) aircraft, 33% where medium wide-bodied aircraft (40 to 80 tons) and 37% were standard bodies with carrying capacities of less than 45 tons. Boeing projects the demand for the world freighter fleet to increase to 3260 airplanes by 2037. This expected demand will be met through new freighters and conversion of passenger airlines to cargo aircraft. IFAM (as it is known) was introduced in April 2020 and has reconnected nine Australian ports to 58 international destinations and helped maintain regular airfreight connections to Australia’s existing export markets. IFAM has supported up to 85% of air freight Australia exports of high-value and time sensitive perishable products to established markets, ensuring Australian businesses could continue to meet supply contracts with international customers. The program also supported the import of critical medical supplies, equipment and other goods of national importance.

Domestically, while aircraft trips fluctuate conversely on the number and severity of lockdowns, the outlook for domestic air freight is more positive.

Domestic air cargo movements are recovering, even briefly surpassing 2019 figures for the month of December 2020. While this may largely be driven by fewer people travelling for the holiday season and instead posting gifts, it is a hopeful sign that the domestic air freight situation in on track to full recovery – at least in terms of volume.